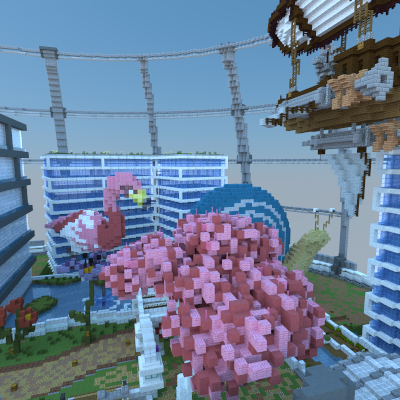 An ambitious project spanning over the course of roughly a week, Eternity is a sci-fi/modern fusion with a focus on our planet’s climate change.

LORE
In darkness we find light; in light, we find hope. And while humanity finally found its answer, it came too late. All that remains is our world compressed in one small atmosphere. But here, they are thriving; humans and animals live happily alongside, and a planet-friendly economy and means of living ensure a world for generations to come, even if but a different one.
But now, even this world finds itself under attack from an enemy more vicious than anything known. It is up to you, all of you, to stop them. To save our world again.

END
For any questions, put them below, add me on discord @worst#9915, or ask me wherever else you may run into me. I’ll probably forget to check this, so the latter two are your best bet!

THE SCREENSHOTS IN THE OP ARE NOW OUTDATED. FOR THE MOST CURRENT IMAGES, CLICK HERE.

@PepperDoc what do you think of this map?

I think it looks cool !

It looks so cute