A set of new features and balance changes is heading to Trouble in Mineville… this Tuesday! (Aug 3)

This is the first half of a big Trouble in Mineville update coming this summer. In the following weeks we’re going to announce another update featuring new maps and a brand-new TIMV experience.

Joining during warmup
You can now join (and participate in) games up to 30 seconds into warmup.

Rule Book
Low-karma players will now receive a mandatory rule book at the start. This will only show once, but anyone can view it again by running /rules.

If someone asks how to play the game, you can lead them to /howtoplay as well, which will open the lobby book no matter where they are. 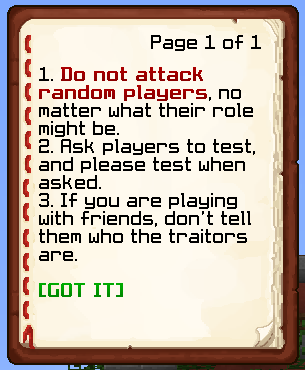 Rainbow Tester Glass
Rainbow animated tester glass is now available as an exclusive cosmetic. You can only get it by completing all achievements.

Wolf Collars
You can now buy wolf collars as cosmetics. They are available in all colors except orange, as that’s the default (free) one.

Should Enchanting Tables be Removed?